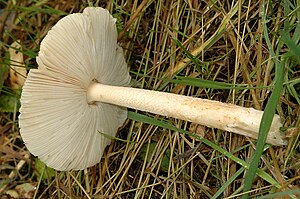 It is similar to Amanita fulva (Orange-brown Ringless Amanita or Tawny Grisette) and Amanita caesarea (Caesar's Mushroom), belonging to the Vaginatae and Caesareae sections of Amanita genus respectively.

The edible Tawny Grisette is a basidiomycete mushroom located in North America and Europe.[4] It was first described from Sweden in 1821.[5] It is easily confused with the 'Death Cap', though not as substantial. The structure is relatively flimsy and the hollow stem often breaks, even when handled very gently.[6] It has fibres on its stalk usually.[7]

The second similar species, the Caesar's Mushroom, is the type species (a species to which the name of a genus is permanently linked) of the Caesareae section of the genus Amanita. It has a distinctive orange cap, yellow gills and stem. Similar orange-capped species occur in North America and India. It was known to and valued by the Ancient Romans, who called it Boletus, a name now applied to a very different type of fungus. The word Amanita comes from Greek 'amanites' meaning mushroom and the word Caesarea comes from Latin 'caesarea' meaning caesarean, of, for, or belonging to Caesar, as this mushroom was highly valued by Roman emperors.[8][9]

The fungi can occur infrequently between July and October in mycorrhizal with hardwood trees, particularly birch and beech in clearings. Its odour is sweet-smelling and it has a mildly nutty sweet taste.[10] It has also been reported from Iran.[11]