Amanita pantherina, also known as the panther cap and false blusher due to its similarity to the true blusher (Amanita rubescens), is a species of fungus found in Europe and Western Asia.

Other than the brownish cap with white warts, distinguishing features of Amanita pantherina include the collar-like roll of volval tissue at the top of the basal bulb, and the elliptical, inamyloid spores. 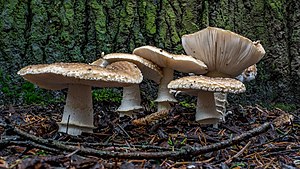 The panther cap is an uncommon mushroom, found in both deciduous, especially beech and, less frequently, coniferous woodland and rarely meadows throughout Europe, western Asia in late summer and autumn.[2] It has also been recorded from South Africa, where it is thought to have been accidentally introduced with trees imported from Europe, and on Vancouver Island, in British Columbia, Canada.[3]

It is an ectomycorrhizal fungus, living in root symbiosis with a tree, deriving photosynthesised nutrients from it and providing soil nutrients in return.

Amanita pantherina contains the psychoactive compound muscimol,[4] but is used as an entheogen much less often than its much more distinguishable relative Amanita muscaria.

Amanita muscaria and Amanita pantherina are illegal to buy, sell, or possess in the Netherlands since December 2008. Possession of amounts larger than 0.5 g dried or 5 g fresh lead to a criminal charge.[5]