The genus Amanita contains about 600 species of agarics, including some of the most toxic known mushrooms found worldwide, as well as some well-regarded edible species. This genus is responsible for approximately 95% of the fatalities resulting from mushroom poisoning, with the death cap accounting for about 50% on its own. The most potent toxin present in these mushrooms is α-amanitin.

The genus also contains many edible mushrooms, but mycologists discourage mushroom hunters, other than knowledgeable experts, from selecting any of these for human consumption. Nonetheless, in some cultures, the larger local edible species of Amanita are mainstays of the markets in the local growing season. Samples of this are Amanita zambiana and other fleshy species in central Africa, A. basii and similar species in Mexico, A. caesarea and the "Blusher" Amanita rubescens in Europe, and A. chepangiana in South-East Asia. Other species are used for colouring sauces, such as the red A. jacksonii, with a range from eastern Canada to eastern Mexico.

Many species are of unknown edibility, especially in countries such as Australia, where many fungi are little-known.

The name is possibly derived from Amanus (Ancient Greek: Ἁμανός), a mountain in Cilicia.

The genus Amanita was first published with its current meaning by Christian Hendrik Persoon in 1797.[1] Under the International Code of Botanical Nomenclature, Persoon's concept of Amanita, with Amanita muscaria (L.) Pers. as the type species, has been officially conserved against the older Amanita Boehm (1760), which is considered a synonym of Agaricus L.[2] 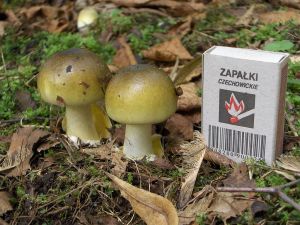 A. phalloides, the Death Cap

Several members of the section Phalloidieae are notable for their toxicity, containing toxins known as amatoxins, which can cause liver failure and death. These include the death cap A. phalloides; species known as destroying angels, including A. virosa, A. bisporigera and A. ocreata; and the fool's mushroom, A. verna.

More recently, a series in the subgenus Lepidella has been found to cause acute renal failure, including A. smithiana of northwestern North America, A. pseudoporphyria of Japan, and A. proxima of southern Europe.[3] 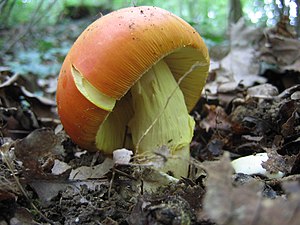 Although some species of Amanita are edible, many fungi experts advise against eating a member of Amanita unless the species is known with absolute certainty.[4] Because so many species within this genus are so deadly toxic, if a specimen is identified incorrectly, consumption may cause extreme sickness and possibly death. 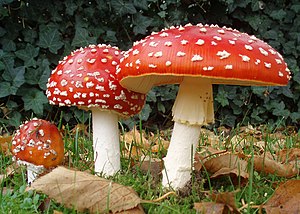 Muscimol (also known as pantherine) is a isoxazole. Amanita pantherina is named after pantherine.

Amanita pantherina contains the psychoactive compound muscimol,[8] but is used as an entheogen much less often than its much more distinguishable relative A. muscaria.

Other species identified as containing psychoactive substances include: